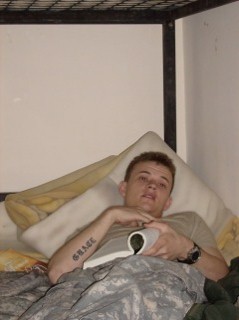 
It takes a couple of years to realize that the people who you surround yourself with will never truly understand the daily and constant battles that a veteran suffering from PTSD and mTBI go through. I have simply stopped trying to communicate these problems with my peers or even my friends and family. It is not because I am ashamed, though I certainly have been ashamed in the past, but more that people do not really want to understand how hard the little things in life have become. As a student in graduate program at a research university I doubt significantly that any of my colleagues regularly meet with neuropsychologists or speech therapist to manage their calendar and appointments. I doubt that they have trouble knowing what day of the week it is or can be thrown it days of painful migraines by getting a bump on the head or by whatever stimulus throws you into another round of painful memories. They often do not understand why you put yourself through the rigors of graduate school when your subsistence is provided by other means, and would not likely put themselves through the same challenges were they in the same position. If I did not constantly remind myself that my friends who have died do not have the opportunity to come home and find a way to continue supporting their communities then I would have quit a long time ago.

As scholar my research is on PTSD during the U.S. early national period will certainly be the focus of my future contributions, but I would rather provide some stark and unapologetic honesty about my own struggles following three tours of duty in Iraq. When I began to write my Master’s Thesis I recognized how writing about violence was a triggering my PTSD and I began to do what veterans do when they are reminded of their own traumatic experiences. At first when I wrote about violence I avoided it by putting anything I could in front of it in my schedule. Once I recognized it I used alcohol to help me face it. Though this is what got my drafts finished they were terrible and by engaging in this negative behavior they became difficult emotionally. Proofreading became a challenge, and worse they required a great deal of editing because I needed to self medicate to even finish them. This process has taken about a year and a half longer than it should have because I was not prepared for what research on warfare would do to me emotionally.

But this is not a cautionary tale; rather it is actually about growth. Like many students working on a Thesis I had a few unanswered questions that did not directly relate to the project. I had been researching military officers serving the revolutionary period since I was in high school and I began to realize that they were often “invalided” by unexplainable conditions. I was studying the Battle of Detroit and one of my sources had detailed descriptions about a fever called “ague.” I had PTSD for a long time and when I went back to Iraq the third time I had TBI and pretty severe PTSD. I was sick for the first two months and at times bedridden. I felt fevered and I constantly threw up, but when seen by doctors I had no discernible illness. Like my somatic expressions of a psychological disorder I realized that all the bouts of ague came after traumatic events and could also have been expressions of PTSD.

This realization did not provide enough material to prove that there was PTSD, and I will not get into my methodology, but it does illustrate how I have learned to use the terrible experiences and difficulties I face everyday as a worthwhile perspective to analyze warfare affect on the individual. PTSD casts a strange kind of amnesia about war because it causes those most affected by it to do everything in their power to avoid reminders of traumatic experiences. So my perspective despite the pain it has caused me in the past (I certainly no longer use alcohol to get through a project) is a useful to provide a better understanding of war as a source of emotional trauma. It has led me to look to different sources and to follow the lives of soldiers after the wars were over. It has become apparent that many suffered from the same sort of odd illnesses suffered by then men in my Master’s thesis. This work will be a significant contribution to the field of history. This realization could not have occurred if I had not conducted by research at the time that I was most impaired by PTSD. It may have delayed my Thesis, but it has helped me uncover something much more important about how war has affected the lives of American veterans from the very beginning of U.S. history. For others struggling with invisible illnesses you are not the first ones, and your generation is not weaker than the preceding veterans. Your impairments are significant and challenging, but they can also become a source of strength and an incredibly valuable perspective.


Joseph Miller  in 2003 commissioned as an Infantry officer and assigned to the 82nd Airborne Division. Deployed three times to Iraq in support of national elections and as an Iraqi Army adviser during the 2007 surge. During his second rotation he was injured by an IED. His awards include the Bronze Star Medal, Combat Infantryman’s Badge, Iraqi Campaign medal with three service stars, Senior Parachutist Badge, and Ranger Tab. Recently named 2011 Army ROTC Instructor of the Year and is completing his Master’s degree in Canadian/American History at the University of Maine.
By Scott Lee