Managing the Low Points "Come on Joe, Let Yourself Have a Good Day" (Thriving) 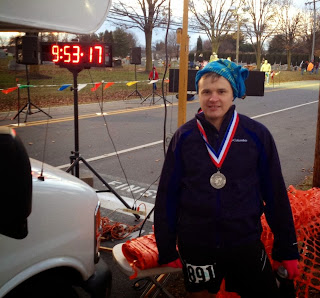 Fa thump, fa thump, fa thump was the sound of my forefoot and mid sole strikes echoed by the rhythm of my breathing ha whoo, ha whoo, ha whoo and finished with the feeling of my heart beating kwa fump, kwa fump, kwa fump. It is hard for the rhythm of contact with the land, lungs and heart beat to synchronize so effortlessly, but that was how I felt as I powered through the thirtieth mile of the JFK 50 miler. That is the point when I know I can finish, but something different occurred this year. I was having an amazing day with nothing noteworthy to complain about. My legs hurt, but I had no heat cramps, I was tired, but extremely motivated, my brain was so taxed that I could not remember the names of the people around me, but somehow I was managing the math for all my mileage splits in my head. Everything was as it should have been for the strongest run in my life.

Usually this point is a reckoning and the finish my sole motivator, but this year I went into beast mode. I grunted in a primal desire to push forward. I was right where I wanted to be, still very tired, but from worthy effort and I repeated a mantra that had gotten me to mile thirty so strong physically and mentally. "Let yourself have a good day." Sometimes it is hard for me to have positive outlook. It is hard to believe that I can have good days. Sometimes in races like this my worry over an unmanageable low point will sap my energy, slow my pace down, and make something I love to do burdensome. People tried to pull me out of my race though.

"If your were in track club you would definitely run intervals and you could run sub 9 hour pace... I usually run that pace."

I am always annoyed with people who tell you they are having a bad day when you pass them. I could have got in my own head, but I waited for a rugged downhill, pulled away and said:

"Well, I run trails, mountains and stairs because that helps with me PTSD. My biggest issue is preventing panic attacks on runs so I focus on that. I seem to be doing great today, and I am just happy that all the causes of my panic attacks left me with my life, arms and legs. I am lucky to have days like today." He was apologetic, but I was too focused on the trail to acknowledge it. I did enjoy nothing-ing his attempt to correct his previously callous statement.

Most of the time I think it is in poor taste to over share these sorts of personal details with some random person on the trail, but in this case I was pissed off. However, like my injury at Bradbury Mountain in August I had earned a great day through all my hard work. Just because that guy ran harder last year didn't give him a pass on this year's lower level of training. I thanked Chick Hill again for all the rugged 7 minute mile paced rocky downhills that made this separation so easy and a conversation that could have been unsettling gave me a lot of confidence. It was a real battle this year to shave 55 minutes off of last year's finish. It took so much focus and discipline to run the first leg of the Appalachian Trail (AT) in a way that maxed my ability to climb with the fact that an elevated heart and the thick fall air were common triggers for me.

I ran on the razor's edge between hard effort and the prevention of a panic attack. I could do this because I trained myself on the terrain that most reminded me of combat and the explosion that gave me mTBI that inevitably made me a civilian. I wasn't going so far as criticizing someone's performance, but I had worked so hard and through real adversity. I wasn't going to have some track club split counter tell me how to train and run my race. On my second ultra I has used that style of training plan, but it landed me in an Intensive Care Unit for three days, so nothing was taking me off my plan.

PTSD and panic attacks were becoming a bit of an advantage. Running your best race without burning yourself out is a similarly difficult balancing act. A life that revolves around managing my anxiety was actually making me better on race day. But it was more than that.

I seemed to be gliding along effortlessly on the first section of the AT and the pace was not difficult until the late forties. I continued to run effortlessly on the first half of the C&O Canal. My deep longing to transcend and merge into the place I live in Maine had made my greatest strength running on rough and rocky trails. My feet slammed into rocks several times at JFK, but my balance kept me on my feet. On the single track trail my movements were light and I passed people with ease. The whole year I needed those rough trails because they were the only place I could stay in the moment. People kept complaining and I held my tongue until the last section of the AT.

This made me look a like sadist, but it was true and this attitude was helping set the conditions for a great day. It had been hard and my biggest problem was consuming enough calories to keep going strong. I would eat PowerBar apple sauce and get sick for a few minutes while my digestion was competing with my quadriceps for energy. This would be worth it when the more slowly released applesauce carbohydrates paid dividends late in the race.

I was running my race plan perfectly. Get off the AT (15.5)  a little behind on pace and make it to Antietam Aqueduct on pace. I came of the AT at 12:49 pace and by Antietam I was at 11:49 splits, 14 seconds under 12 minute mile 10 hour pace. I gained about 5 minutes and I was so pumped. I recognized my pace earlier in the day, but I would wait till the last twenty miles to really grind at max effort. I can't describe the joy that comes when you do something as hard as run fifty miles in under 10 hours, and how amazing it feels to still have the fortitude to push harder in the last twenty miles. I invite anyone who thinks PTSD is a syndrome of the weak to line up with me next year and call me weak on the back twenty. At this point going that hard simply maintained my pace at 11:49. I was outside of myself, though the last 8 miles of road and high winds was miserable. I was tired, cold and on cloud nine. I kept a run down hill and straightaways, and walked uphill until I reached the last mile and a half. I must have clocked a 10 minute last mile because the finish line came quickly. I looked at the clock and it was 9:50(:32).

My wife was waiting for me and we were so excited. I let out a guttural yell, as if I was some medieval knight after vanquishing all my foes. I waited for, one of my living heroes and founder of Team Red, White and Blue, Mike Ervin to cross and as I cheered his equally amazing accomplishment. I never thought I would ever be able to stay in front of such amazing runners and leaders on veterans issues, it is still hard to believe that the day was not something I imagined.

When life is miserable it is so much easier for me get stuck, but it is often what I do in the low points that sets the conditions for when I feel stronger. Its hard to run my race, suck down my applesauce and just let my legs keep going. Having PTSD feels like running on a gnarly, rocky and mountainous trail when everyone around you is on a smooth surface. Yet when I am on rocky trails I am in my element, and everything feels easier when I recognize how much harder life is for me. I need that perspective. At the JFK 50 Miler most the people around me left the AT demoralized while I left fired up, and easily made up my pace before my toughest push. I had time in the bank and chipped away a little more time in the last ten miles. PTSD keeps me in the doldrums a lot more than others and I often have to say things like, "just manage this low point Joe." Sometimes when I am in the toughest place on my path and its important to let those momentary set backs be momentary setbacks. Sometimes I struggle because the path is rocky, but when I manage my low points I sometimes find myself at Antietam Aqueduct with time in the bank, feeling amazing and surging forward because I did everything I could when the path was harder and everything was a lot more difficult. The contextually accurate positive self talk that guided me to an amazing day was just a representation of a coping mechanism that I have developed over months of practice. Managing PTSD is extremely difficult but it has taught me how to thrive in some of the most challenging of circumstances.

*Ultra Runner Geoff Roess is known for focusing on the low points on 100 mile races. It keeps me going every time I have a rough day.
By Joe No comments: