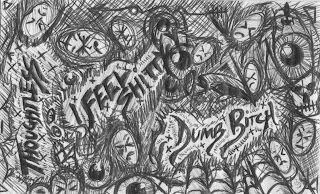 I unintentionally upset my husband last night, the details of which are inconsequential to the emotion behind this post. When I left the house for work he remained behind sitting alone unconsoled. I was so mad at myself that before going into the Jail I sat in my truck, grabbed a scrap of paper, and frantically scribbled out my frustration.

They say a picture is worth a thousand words.... so enough said.
By PTSD, A Caregiver's Perspective 4 comments:

A Warrior's Perspective on Honor

I received a request from Paul Allen, a Combat Veteran decorated with the Purple Heart to post a letter he has written. He states,

THE WARRIOR’S CODE OF HONOR


It was revised for the first and last time 11/6/09 on request from the CSRA Wounded Warrior Care Project, who's first step in giving care is to issue my Warrior’s Code to the wounded warrior. [The] CSRA Wounded Warrior Care Project of Augusta, GA says the Code drastically reduced the secret suicide rate before the revision, and now after the 11/6/09 two hundred word addition giving hope, I am told that it reduces the suicide rate even more.

Please read as it gives a powerful message to those who have fought and lived so that they may fight another day. From http://www.militarycodeofhonor.com/,


As a combat veteran wounded in one of America’s wars, I offer to speak for those who cannot.Were the mouths of my fallen front-line friends not stopped with dust, they would testify that life revolves around honor.

In war, it is understood that you give your word of honor to do your duty–that is–stand and fight instead of running away and deserting your friends. When you keep your word despite desperately desiring to flee the screaming hell all around, you earn honor.

Earning honor under fire changes who you are.The blast furnace of battle burns away impurities encrusting your soul.The white-hot forge of combat hammers you into a hardened, purified warrior willing to die rather than break your word to friends–your honor.

Read On as Paul delivers us his THE WARRIOR'S CODE...

Depression and the Combat Veteran

Have you ever felt so sad, that sad where zoning out can mask momentarily? Where a laugh can give you a spritzer of joy, but falls flat into felling of sorrow?

I do not want to take my medications anymore, they make me feel less of a man. I want to feel my virility as I effortlessly strum her passion.

That sadness that engulfs and to answer I call upon disconnection, not just from everything and everyone but the self that I seek as it flees my rationality.

I received this comment on the 20th of February from a female combat veteran.


I am a sister, a daughter, a mother, a wife, a combat veteran. It's sad to say that after all this time the horror I have experienced in the war still haunts me. It is affecting my relationship with my children and my marriage to my husband of 10 years. I felt so alone sometimes...empty...mad...I can see myself changed after my service and I don't know how to fill the emptiness inside me. Things around me in the civilian world still triggers my memory. I want to forget everything and move on. I couldn't.... I found my self sometimes staring at a distance...screaming silently inside of me...tears would fall down my cheeks..my husband would ask.."Whats wrong? Do you want to talk?" I always say nothing...I felt that I need to enlist in the service again just to feel whole again...I don't know what to do....


Welcome home. Some suggestions...do not reenlist...that will make your situation worse and you could possibly loose everything. Right now you feel like everything is wrong. Today you have been experiencing delayed reactions to the insanity of combat but did not have time to process during the threats to your life. If you would have felt what you feel today on the scale you experience today, while in combat, then you would of had a greater chance of getting killed.

What you are experiencing is a normal reaction that happens when we leave the adrenaline driven world of combat and then transition to home in the "real world" (which to us seems to be a false reality). Our world view have been completely and permanently altered by what we witnessed. To describe "what I did" in combat usually leads to use of the word "witnessed." I can only reconcile my spiritual side by seeking the perspective of a witness; to never forget, to be vigilant in advocating for the mentally wounded and to find a personal purpose from the insanity of war. This was paramount for me to move past the position you reside in now.


By Scott Lee No comments: 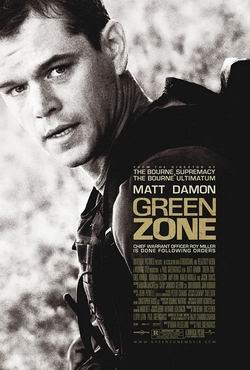 On behalf of Universal Pictures, we are pleased to announce our collaboration on their upcoming film, Green Zone, and share all available assets in anticipation of the March 12, 2010 release! Step into the Green Zone where no one can be trusted and every decision could detonate unforeseen consequences.

Matt Damon is re-teaming once again with Paul Greengrass, the Director who brought you The Bourne Supremacy and The Bourne Ultimatum for the exciting new thriller Green Zone! Be sure to check out all the latest information below including production stills, the film's official website, and an awesome featurette!

**STAY TUNED for more film assets and information coming your way in the weeks ahead!

Matt Damon and director Paul Greengrass (The Bourne Supremacy, The Bourne Ultimatum, United 93) re-team for their latest electrifying thriller in Green Zone, a film set in the chaotic early days of the Iraqi War when no one could be trusted and every decision could detonate unforeseen consequences.

During the U.S.-led occupation of Baghdad in 2003, Chief Warrant Officer Roy Miller (Damon) and his team of Army inspectors were dispatched to find weapons of mass destruction believed to be stockpiled in the Iraqi desert. Rocketing from one booby-trapped and treacherous site to the next, the men search for deadly chemical agents but stumble instead upon an elaborate cover-up that inverts the purpose of their mission.

Spun by operatives with intersecting agendas, Miller must hunt through covert and faulty intelligence hidden on foreign soil for answers that will either clear a rogue regime or escalate a war in an unstable region. And at this blistering time and in this combustible place, he will find the most elusive weapon of all is the truth.