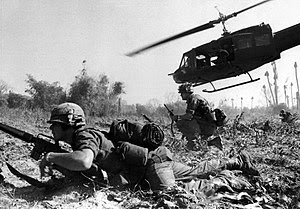 Image via Wikipedia
In the Vietnam War (VW) we had a PTSD rate between 15-30%, depending on where you get your information. Lets split the difference, say we have a 22.5% rate of PTSD from the VW. Now, if you factor in the Iraqi vets lower casualty rate due to medical advancements and the higher rates of combat exposure. We will not even consider the fact that Urban Combat and Guerrilla Warfare, the worst kind of military engagement possible. Now in add extreme combat trauma combined with the trauma of living through life threatening wounds.

Where do you think this is going?  Maybe somewhere around double the incident rates of PTSD from the VW? Thats close to 50%, ok, lets say that would be impossible.

Do you really think that we will have the same PTSD rates as the VW? Even with the above factors tabulated in? Probably not. So, does that mean that it will be ok to have a 30-40% PTSD rate for the Iraqi War? I do not think so.

Like I have said before, we will not know until 10-20 years later what the impact will be. It will take years for PTSD to become debilitating.
By Scott Lee 7 comments:

Who is Killing our Veterans?

In the coming years we are going to see a growing trend in veterans suicide. On Nov. 13, 2007 CBS reported:


Veterans aged 20 through 24, those who have served during the war on terror. They had the highest suicide rate among all veterans, estimated between two and four times higher than civilians the same age. (The suicide rate for non-veterans is 8.3 per 100,000, while the rate for veterans was found to be between 22.9 and 31.9 per 100,000.)"

This is just the beginning, the Iraqi veterans have been exposed to unprecedented levels of sustained combat. Never before in the American history of War have our soldiers seen three and four tours of combat as a common experience.

Penny Coleman, author of Flashback: Posttraumatic Stress Disorder, Suicide, and the Lessons of War testified before the House Committee on Veterans’ Affairs on December 12, 2007,


"My name is Penny Coleman. I am the widow of Daniel O’Donnell, a Vietnam veteran who came home from his war with what is now known as PTSD and subsequently took his own life. I use the term PTSD grudgingly—it is the official term, but it is deeply problematic. My husband did not have a disorder. He had an injury that was a direct result of his combat experience in Vietnam. Calling it a disorder is dangerous; it reinforces the idea that a traumatically injured soldier is defective, and that idea is precisely the stigma that keeps soldiers from asking for help when they need it."

She goes on to report that more than 6256 veteran commit suicide a year.

The VA system is poorly underfunded and not ready to take on such a high level of veterans needing mental health care...as we will see in the next 10-20 years.
By Scott Lee 8 comments: