The Writings of J. R. R. Tolkien: A Tale of Post Traumatic Growth 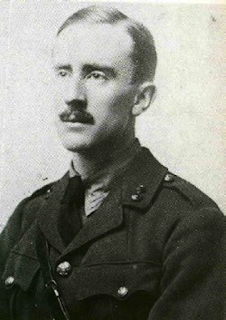 The World War I generation is often only characterized by writing influenced by transubstantiation. Many of the writers who fought in the Great War never quite recovered from his experiences. Their collapsed worldview often overshadowed those who used their experiences in war as source of understanding humanity. J. R. R. Tolkien’s service in the trenches invalided him for years after the war. Despite losing two of his best friends and his immediate difficulties after the Battle of the Somme Tolkien utilized his experiences to create a truly powerful story. Rather than focusing solely on loss Tolkien found away to use his service in the trenches as a source of personal growth(This is an adaption of a khronikos post).

J. R. R. Tolkien was an outspoken critic of a young intellectual discipline of psychology.[1] His stories were often criticized because of their setting in the fantasy world of middle earth ignored the world that Tolkien lived in, but this view ignores the parallels between his characters and his own life. It also ignore the fact that the heroes of his tales, Hobbits of small stature that lacked physical courage, challenged the notions of ”Social Darwinism.”  This ideology dominated British jingoism and the early profession of psychology.[2] His two heroes Bilbo and Frodo Baggins challenged archetypes of masculinity while criticizing nationalists that attempted to subsume or overtake other culture. The Hobbits fought for other homelands because of their attachment to the shire.

Bilbo Baggins’s decision to support the quest of dwarves struggling to recapture their homeland would parallel Tolkien’s decision to serve in World War I. Moreover, Baggins’s selection was a purposeful rejection the ideals of soldiery. In his undergraduate education J. R. R. Tolkien joined a group of friends called the Tea Club and Barrovian Society (TCBS).[3] Like Bilbo Tolkien was a reluctant to serve and was the last of his peers to join up. He instead finished his degree at the top of his class at Cambridge and, though he could have easily taken a less dangerous assignment, he followed his friends into the Lancaster Fusiliers. Unlike his friends who served in the intelligence or in the infantry Tolkien became a signals officer, and would play a supportive role. When Baggins was selected as a thief Tolkien stated that a warrior would have been more appropriate, but the wizard Gandalf observed that the “warriors are busy fighting one another in distant lands.”[4] Tolkien was no advocate of war but his love of his country urged him to serve and his friendships urged him to serve in a front-line battalion.

Like the Hobbits of his tale Tolkien would be constantly exposed to danger. Tolkien survived the Somme—which was largest battle in history. Though not serving as an infantryman he was repeatedly exposed to artillery inside of underground command posts. His insights are evident in the Lord of the Rings by his use of onomatopoeia for drumbeats of “doom, doom” inside of dank tunnels while being chased by orgs.[5] Even the poisoning of Frodo by the Black rider held correlated with the death of his friend Geoffrey Smith after a minor shrapnel wound proved fatal due to “gas gangrene.”[6] 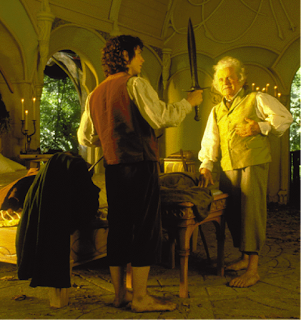 For Tolkien challenged the “Social Darwinist” theories championed by Kenneth Spencer as well as the eugenic theories of psychologists Francis Galton, H. H. Goddard by his use of non-archetype heroes.[7] Hobbits broke the mold of stereotypically larger heroic figures, but their value system gave them a unique strength against the dark power of Sauron that stronger men could not resist. He also challenged Galton’s concept of nature over nurture by making Frodo the adopted son of Bilbo Baggins rather than the genetic offspring. Again Tolkien’s value of place as significant source of person’s culture and identity without justifying ones place as superior to any other. His mythical world was a nuanced of expression of cultural values in reaction to scientific and psychological theories of his day.

Tolkien was also illustrating how individuals were corrupted by conflict and a quest for power. Bilbo and Frodo desired adventure and wished to help their friends yet the only ones to fall in their circle of companions would succumb to their desires for power. Boromir would try to prevent the destruction of the one ring and Thorin would succumb in battle only after alienating allies in securing wealth for themselves.[8] In both cases Hobbits strengthened by their values, which were a product of love of their home (environment), alone secured the a the quest’s outcome. Bilbo would broker an alliance in The Hobbit and in the Lord of the Rings Frodo, Sam and Gollum would alone reach mount doom to destroy the power of Sauron.

Tolkien’s precise critique of “Social Darwinism” and genetically deterministic psychological theories are only present within in a proper understanding of the historical development of psychological theories. For Tolkien WWI, like his stories was an internal battle of the individual’s character. One could not sit on the sidelines while their colleagues were fighting terrible war and their homeland needed them, but one should also not assume that ones homeland was superior to others. Tolkien said, “I don’t defend ‘Deutschland über alles’ (Germany over all) but certainly… ‘Alt for Norge’ (all for Norway).”[9] For Tolkien love of nation created empathy for other cultural understandings of place. His values did not praise violence, but equally would not abandon his friends and countrymen in their greatest struggle. His mythological world became an escape and means of expressing his own difficult experiences and values in relation with the Great War. Even in victory Tolkien and Bilbo believe it seemed “a very gloomy business.”[10] Most importantly, for Tolkien “The anxieties of war… stoked his creative fires,” and the culturally iconic figures in his stories also served as a social commentary about World War I.[11] 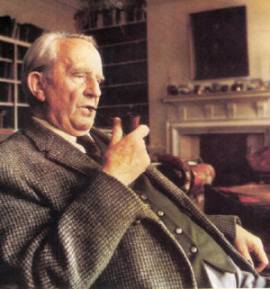 Tolkien did a few things that enabled him to grow as person following World War I. He kept friends who pushed him to succeed and who also understood what it was like to survive a war. The remaining members of the TCBS pushed each other towards continued success and used their loss as catalyst to speak for these who no longer could. In this way they leveraged survivor guilt to push they’re lives forward. Tolkien’s work was both a commitment to his own growth but also an act of morning. At my lowest I think about the gift of life that I have and the men I served with whom no longer have that gift. Tolkien also found a way to escape and express his own difficult experiences through the mode of writing. Fiction is often clearer than the truth and the sentiment of his books have deep insights about the nature of war. I would urge veterans to pick up his novels both to recognize his insights about war, and to recognize a figure that endured the worst campaign imaginable, and found a way to grow because and not in spite of it. Growth is hard, but Tolkien found a way. So by studying his life and writings you might find inspiration for your own problems.