The Terrible Moments That Define Us

Warning: This contains profanity and descriptions of war wounds. 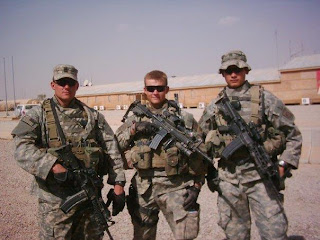 One of my greatest sorrows is how some of the most memorable and significant events of my life were driven by bind hatred. I want to talk about an event that has challenged the very fabric of my humanity and has changed me.  An event that probably lasted less than ten seconds has irrevocably altered my life. During my second deployment as Anti Tank Platoon leader I was serving as the escort for my Battalion's Operations Officer Major (now Lieutenant Colonel) Massaracahia. While placing our vehicles in positions to move out we heard an explosion. After the fact we learned that a mentally ill women,  reported to be carrying a baby and, most likely remote detonated, blew up on a crowd of civilians waiting in line to receive compensation for damages to their homes (sustained during a massive clearing operation of the city). This was the most horrific event that I have ever experienced. There is still blood stains on my boots; blood that literally and figuratively will never wash away.

Because we were already in position to move my platoon was among the first elements to arrive and because my platoon had less than 4 soldiers who could dismount their vehicles, I went out to help who I could. I ran out with a combat life saving kit and came across the most significantly wounded human being I could ever imagine. At first he simply looked as if his injures were a severed leg, but when I tried to lift him his torsos gave in ways that they should not have. Gravity rather than the sinews of his body held him together (this moment was something I could not even remember in therapy and was blocked out until I wrote this account). His torso was rocked with multiple injuries that I could not even see through all of the blood and charred clothing.

He was bleeding from his head, but his worst injuries were on his left leg. Even with the damage to his abdomen I hoped  maybe he could be saved so I struggled to find a place to put a tourniquet. But, his left hip more resembled ground beef than human flesh and it was hard to tell where the wound began. It was difficult to determine what parts his body was intact and what had liquefied. His leg was still technically connected, but by what I could not determine because it all resembled a bloody and dirty gelatin warmed by the sun into a substance that was slightly between liquid and solid. No place for a tourniquet and the wound was far to large for an occlusive dressing. This poor man whose only crime was trying to replace the damage cause by a major U.S. operation was going to die and there was nothing I could do. Worse, in that moment despite the carnage I noticed that their were multiple supporting elements coming to help and that the security was getting really disorganized.

I was a platoon leader and though every fiber of my body just wanted to comfort this man who was going to die. I could not save him and now this poor bastard would die alone on street corner in Tal A Far Iraq. I will never forget the look on his face when I left him there to die. He did not know I was leaving to keep others alive and that real threats were trying to exploit our lapsed security (threats I would help eliminate). That poor man just thought I had given up on him. It was like watching a man's soul die along with his body. I am sure there have been worse moments, but I cannot fathom a greater amount of grief that has ever existed than watching his face as I left to take charge of the perimeter. I know that I did the right thing, but he did not understand. He died on that street alone and abandoned as an expectant casualty.

I wanted to curse the world that made me look a man in his eyes, realize that he was beyond help, and move on to things that I could effect. I wanted to say fuck the universe that made me have to be so callous and so methodical. For a moment I hated a world that possessed hate to such a degree that a man might see another man suffering, recognize the tragedy, and be forced to move on because he was an expectant casualty. If I or someone I loved was exposed to a similar circumstance all I would wish was that someone could comfort them. But, I had a platoon to manage and the area was less than secure. I thought to myself "I can feel this later but I have a job to do right now." I would not be able to feel anything but anger for years.

I will never dispossess that moment, with the sorrow and empathy that I gained from that man's terrible injuries. Moreover, how I left him their to die alone. I will possess that man's humanity to my last breath. Yet, I have no idea who he actually was, what he did for a living or even his name. Watching a man in such pain, with no help for survival, die made me feel like I let him down. It broke down cultural barriers. No worldview is worth what happened to that poor man, and you would have to be taught to hate others your whole life in order to justify the brutal killing of civilians. I just cannot fathom what it took to commit such a terrible atrocity. 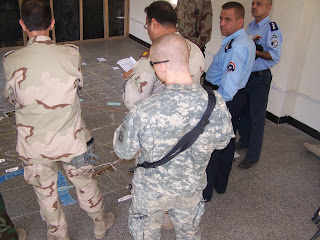 I hope to never believe so passionate about a cause that any actions are justified. Because when "the ends justify the means" where does it stop before another innocent man is lying on the ground bleeding out with no possibility of aid. I came from that broken, but better. In the years that followed I would be asked to train Iraqi units. My empathy for the Iraqi people became the source of strength for the most difficult time period of my life. But that is another story altogether. It is not necessarily the moments by themselves that define us, but how and what we learn for them. In the same set of circumstances, other men, even better people might have learned another lesson. In the end all I know is that I did all I could do and that is enough. I was not then nor am I right now afraid of what I felt in those moments (though at times in between and certainly in the future I will be). But, I have had to fight to get there and I will have to keep fighting in order stay where I am. All of that is worth it because that poor nameless man's life is not wasted because I struggle everyday to never forget what hatred brings to our world and that beyond all the misery of that moment, which will never go away or be made better, I am so beyond lucky to have survived it. Better to have my moral compass still intact. This has been the hardest battle I have ever fought, and I think I winning.

My take away is simple. Do something tangible that helps others everyday. That is all I could do then and it is all I can do now. But, that is not a burden, rather it is a hard earned privilege that I am lucky and better to have gained. I owe that nameless man who taught me this terrible, but valuable lesson and I owe myself to have the courage to face it and apply it. Lest it be for nothing.
By Joe