MST in South Korea and Combat PTSD in Baghdad Part I

In February 1998, I was 18-years old, fresh out of high school, with an M16 hanging from my shoulder and camouflage paint smeared on my face. I was excited and a little naïve as to just what I had gotten myself into. 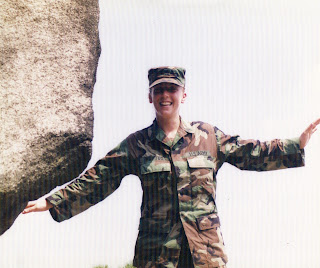 No one told me that fifteen years later, I'd be tired, very broken, isolated, and damaged goods. Yes, I was assaulted and harassed while serving my country. No one warned me that joining the Army made me twice as likely to be sexually assaulted than my civilian counterparts. That's not what I was signing up for.

I come from a family where military service makes you a man (or a woman, in my case). Both of my grandparents served in the Army Air Corps in World War II and my father dreamed of being in the Navy. Plans changed for him when I was born and he broke his leg in a motorcycle accident. I wanted to travel to crazy places few people have ever heard of or even knew existed. I wanted to meet those people I would see in National Geographic commercials or the World Almanac my grandfather would show me when I was little. Most of all, I wanted to get out of St. Louis and experience life on this irresistible planet.

I wanted to declare my independence to everyone I knew, so I shaved my head and signed the dotted line. A little rebellious I guess, but I liked the excitement of it all!

I was born a leader, tough as a brick shithouse, and could knock boys over when I played soccer with them in the neighborhood. I played all the sports, ran faster than most guys I knew and could outwit anyone in intellectual debates in high school. I remember keenly, the Catholic, Republican in my Advanced English class senior year who would debate with me on issues such as abortion, the death penalty, and who would be President of the United States first: him or I.

In 1997, my senior year, GI Jane came out. I watched it the night before I left for the Army and dreamed of being just like Demi Moore, just as tough as the guys. I was ready, willing, and able to do anything a "man" could do.

Eleven years later, 2008 to be exact, I wound up 2100 miles from home, staying in a homeless veteran’s shelter, attending a three-month “Renew Program” for women veterans who have experienced Military Sexual Trauma with Post-traumatic Stress Disorder. There were only five women in my group who were willing to face all the pain of their past to come out feeling better on the other side. Who says women aren't strong?

There, I met Amanda Spain, producer of "In Their Boots," an online documentary series showing the struggles of Iraq and Afghanistan vets when we come home. She asked me if I'd be willing to share my story with those that were willing to listen. Apprehensive, and shocked that someone finally cared enough to listen, I hesitatingly agreed.

It was the first time, ever, to share my story, from beginning to end.

One night in South Korea, I went out with some friends to the "Ville" which is all the little hole-in-the-wall bars and restaurants right outside the gates of Camp Carroll, Waegwan, South Korea. It was a dark, spring night and I had to work the next morning at 0730 hours to complete my yearly Common Tasks Training (CTT) with the unit. I went out for an hour or so, only had one small drink, as being drunk was not my cup of tea at the time. I went to leave an hour later and someone had stolen my keys. Nervous, I walked through the gate with a male, non-commissioned officer I had seen around but didn't know very well. We were taught to respect and trust the NCO's and I had no reason not to. You are not allowed in South Korea to walk through the streets alone as it is with Armed Forces Policy in most places overseas. My roommate was not in our room so I decided to stay in the NCO's room down the hall to wait for her to come home. I checked several times throughout the night but no answer from her from my knocks on our door, her boyfriend’s door, or her cell phone.

The male NCO asked me four times to have sex with him and I said no all four times. First, I tell him I don't know him, then I tell him I have a boyfriend in Germany, then I tell him again I don't know him. The final time, I tell him I am on my period and NO! Next thing I remember is my naked body being violently thrown all over the bed and I am unable to scream or stop it. It was if I was standing at the threshold of the room watching myself being raped, then being back in my body not knowing who was doing what to me. I don't know, to this day, if I was drugged or hit over the head.

I remember hearing his roommate, just on the other side of the room and I am trying to scream, but nothing comes out. It is as if I am out of my body watching from across the room and can do absolutely nothing to get back in my body and fight him off.

I wake up the next morning twenty minutes late for my 0730 formation. Shaken, not quite sure what happened that night and I am standing naked in his bathroom and cannot un-wedge the tampon that is shoved all the way up.

I report late, as fast as I can and my Platoon Leader asks me what's wrong and did I drink too much the night before? He smells my breath and concedes that that's not it, but what is it? I don't even know.

Three days later, I get flashes and cold chills as I am standing in Battalion Headquarters when I see him for the first time since. My body knew what happened before I could completely piece together what exactly happened. Somehow, I am told, the body always remembers. My hands are shaking and sweaty and now it's all clear. It's too late for a rape kit but I had to tell someone.

Article originally published at Huffington Post "To Hell and Back Again"

Angela Peacock  served in the Army from 1998 until medically retired as a Sergeant in 2006. In 2001 in South Korea, Angela was sexually assaulted. In 2003 she deployed to Iraq in the initial invasion of Operation Iraqi Freedom. Upon release from the Army, she battled addiction, homelessness and multiple suicide attempts. Today she lives with Combat related PTSD and MST, she is a Local Leader for IAVA, a Peer Mentor with WWP, and the Founder and President of St. Charles Community College’s Student Veterans Organization and the Missouri Community College Association’s Student Leadership award recipient and a member of Phi Theta Kappa.
By Scott Lee