The Tradition of Military Tattoos

During my time spent working as a Corrections Officer I saw many inmates with homemade prison-style tattoos; human flesh used as prime real estate on which they eagerly advertise their affiliation with a gang, names of fallen friends, teardrops on the face, full sleeves, backs, chest and necks all adorned with crude bluish colored designs. On the right side of the law however, the decision to permanently mark ones body with ink is not carried out so lightly.

And then there are military tattoos; the Navy being the most synonymous with this age old tradition harking back to salty sea dogs emblazoned with Popeye style anchors on their forearms, or Hawaiian maidens manipulated by undulating abdominal muscles animating the Pacific Island beauty into a hula dance. But that was back in the day and tastes have become far more sophisticated since then.

In 2007, my husband began to bandy around the idea of getting another tattoo, one to memorialize his time in Iraq. The tattoo would pay tribute to the sacrifice made when he re-enlisted 10 years after leaving the Army National Guard volunteering to deploy down range with his Brigade Combat Team. He also wanted it to signify the pride he felt in having served, and despite wishing he wasn't injured if he had to do it all over again he would unwaveringly return to the Sand Box. 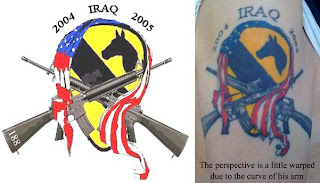 Being the artistic one in the family I felt in my own way I would also be honoring my husband by contributing to the tattoo's final design. I enjoyed sharing my draft concepts with him; like an excited teenager I would present one idea after the other... "What do you think of this one?" "Here's another variation on the same theme." And he would always give me constructive feedback on how it could be tweaked until finally he felt it captured all the important elements of his deployment; the 1st Cav patch that he wore on his right arm, the Stars and Stripes for the people he was serving, the dates of his deployment, and the M16 personalized with the same number on the stock and Aimpoint scope exactly replicating the rifle he carried in Iraq.

After weeks of back and forth, fine tuning every detail, in November 2007 (coincidentally the same month he received his Purple Heart three years earlier) he took the design to the tattoo artist here in our town who I'm sure you'll agree did a fine job replicating the final draft on my husbands upper right arm.

He now carries with him an eternal affiliation to his cause, his country, and a time in his life that permanently redefined who he is today.
By PTSD, A Caregiver's Perspective