Realities of Coming Home From Combat

This post is reproduced with my husband's permission from his blog One Veteran's Battle. 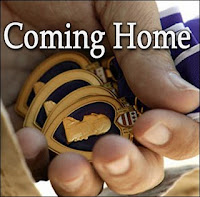 Every soldier whose been in combat cannot help but to be changed for life. It may be surprising to know, the veteran believes everything will be OK, that they will comforted if he can just get home. When they finally arrive, there's an element of euphoria, followed by disorientation. Veterans slip into what can only be described as an 'illusion of normalcy.' They pretend that nothing has changed.

As time passes, it could be 1 month, or 2 years, but most commonly it's approximately 3 to 6 months, the veteran can no longer suppress what he's become as a result of combat. His true self begins to emerge. This can be expressed in many forms, anger, depression, isolationism, even suicide. The veteran will become sensitive to being around others and startle easily, and may show little interest in doing the things he once enjoyed. His interests may be alcohol, drugs, porn, or absolutely nothing at all. But these things are not really the man. They are expressions of pain seeking an outlet. It wasn't long ago he was in combat in a shit hole world. Everything you can think of was discarded onto the streets, waste paper, plastic bottles, rubble, feces, urine, and even decomposing animals (both domesticated dogs, etc. and human) now he's in a 'civilized' world with no way to express himself in a normal, culturally accepted way. Therefore, veterans turn to violence, isolate themselves, or commit suicide. How can anyone that hasn't been 'In the shit' possibly know what fucked up shit veterans have dealt with? Pisses me off when I hear anyone call a veteran a freeloader. They have god damn clue what their talking about. I wish they were walking the streets of Baghdad in 2004. If they were to survive they'd shut the fuck-up.

Once the veteran crosses that boundary to the new 'true self,' both the veteran and his spouse must come to terms with the changes in their relationship together or it's doomed to fail. I represent a failed attempt to make the adjustment. I failed, or she refused to accept the changes in me, we ended up in divorce. I had no intention on giving up on the relationship; it was my intention to try and work it out. It was her decision to abandon our relationship. But I realize now, it was the best result possible. I'm just sorry she did it in such a mean spirited way (another post).

I'm a bad example because my marriage was in trouble when I left for Iraq, nonetheless, I think I observations of value. The bottom line is, if you had a good relationship prior to deployment, despite the seemingly insurmountable difficulties resulting from combat experience, much can be overcome with love. I'm not saying it's easy, because it's not. It's hard for the veteran because he's confused, most likely working out prescriptions through VA, suicidal at times, depressed, and anxious. He feels these things within the context of his love for you, his spouse. His spouse sees a changed man, someone she didn't marry. Some women understand the reason, others don't. The ones that do understand and stand with their man, that's true love and compassion. They will work it out in the end. Those relationships troubled before Iraq, as mine was, or those that cannot find common ground and understanding, will likely fail.

Saving a relationship after being separated by something so insidious as combat would be hard on any family. Coming home can provide initial relief from the realities of war, but soon the nightmares return, and we act out, unsure what to do with these emotions forged in war and expect them to fit-into a world that has no understanding of what they've become.
By PTSD, A Caregiver's Perspective