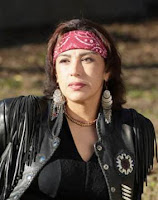 
My work is about feeding our spirit by expressing my truth in language that is from my heart, life experience and my personal truth. It is my hope that people understand that what we speak we create, and what we fear most is what we call into our lives. By fighting for peace, we will inevitably fail because fighting for something is not a peaceful act. To have peace, we must become that which we desire. In order to learn how to stop this nation’s cycle of violence, we must heal our nation’s past acts of violence against others, in order to see how our present actions affect the future.

The letter below was written by Captain Anu Bhagwati, a former Marine to Columbia University School of Social Work on behalf of Eli. As I see it, this University has disrespected this honorable warrior, violated social work ethics and most of all violated her civil rights.

It is with grave concern and a deeply heavy heart that I write this letter to you. My name is Anu Bhagwati. I am the Executive Director of Service Women's Action Network (SWAN), the nation's leading advocacy organization for military women and women veterans. I am also a former Marine Corps Captain.

I am writing because of a serious breach of ethics committed by the faculty and administration of the Columbia University School of Social Work against an Iraq war veteran, Sergeant First Class (SFC), Ret. Eli Painted Crow. Several years ago, SFC Painted Crow was interviewed by Professor Helen Benedict, who is on faculty at the Columbia University School of Journalism, for a narrative book titled "The Lonely Soldier." Professor Benedict interviewed and took advantage of SFC Painted Crow during a time of enormous mental and emotional turmoil for SFC Painted Crow. As a returning Iraq war veteran, SFC Painted Crow was diagnosed with Post-Traumatic Stress Disorder. In fact, she has been officially designated as a 100% disabled veteran by the Veterans Benefits Administration for the psychological and physical wounds she sustained while serving her country.
Unfortunately, despite there being a plethora of scholarly publications and first-person accounts by women veterans themselves on the subject of women in the military, the School of Social Work used "The Lonely Soldier" as the single required text for this year's Capstone Project on women veterans, and then required the students to treat and evaluate SFC Painted Crow as a case study.

It is shocking that the School of Social Work officially stands by the declaration that it has not violated any ethical codes of the social work profession by evaluating a live human being without her consent.

SWAN communicated with the School of Social Work faculty about our concerns with the Capstone Project between the fall of 2010 and the present. One of our Board members who is on faculty at the School of Social Work reached out and expressed concern about the Capstone Project to the faculty as far back as October 2010, but her recommendation to consult with SFC Painted Crow about the project was ignored. Subsequently, one of our staff members who is also an MSW student at Columbia then reached out to the Capstone Committee in March 2011 to express her concerns with the ethical conduct of the project, and was also ignored. It wasn't two weeks ago that I found out that the Capstone Project was in fact proceeding as originally planned. I sent a personal note to the Committee expressing our concerns about the use of SFC Painted Crow as a subject of clinical analysis by several hundred MSW students, to which the Committee responded. The entire Committee met with me personally on Thursday, April 21st, at 11 AM, to discuss the project and, specifically, our objection to the use of SFC Painted Crow as a case study. During that meeting, the Capstone Committee openly confessed shame and embarrassment in not reaching out to SFC Painted Crow at the inception of the project, expressed their reservations about inviting Professor Benedict to participate on the final Capstone panel, and expressed their intentions to apologize to SFC Painted Crow as well as to the entire student body, and to invite SFC Painted Crow to NYC to publicly address the faculty and students and share her true life experiences. Since that meeting, the Capstone Committee has reneged on all of those intentions. Furthermore, the faculty have apparently misled Dean Takamura and the students about the content of e-mail exchanges and phone calls with SFC Painted Crow, and the content and manner of their interactions with SWAN.

Subsequently, Dean Takamura refused to meet with me last week, even though I advised her executive staff that this project was now damaging not only SFC Painted Crow but also the long-term reputation of the School of Social Work and Columbia University at large.

To rectify this escalating situation and bring closure to all parties involved, I urge you to immediately initiate an Investigative Review Board, or the investigative equivalent, into the School of Social Work's conduct of the Capstone Project. Furthermore, I urge you to evaluate the content and conduct of the veterans class currently being taught at the School of Social Work, to ensure that no ethical standards have been breached there as well.

I also urge you to start a serious dialogue at the university to determine whether or not the various departments and schools have set strong enough diversity and equal opportunity policy guidelines with respect to the treatment of veterans on campus. I also urge a review of all university policies with respect to the use and research of veterans as human subjects by relevant schools and research programs, to include the School of Social Work and the Graduate School of Journalism.

Columbia University is now responsible for additional ongoing harm and injury to SFC Painted Crow. What is disturbing is that Professor Benedict, Dean Takamura and the Capstone Committee at the School of Social Work continue to insist they are not accountable for the harm and wrong inflicted upon SFC Painted Crow during the conduct of this Capstone Project, and to that end have misrepresented the issue in numerous communications with SFC Painted Crow, Columbia students and others. That officials of the University would attempt to cover up this harm, especially during a time of war is truly regrettable. Given the verbal abuse that wounded combat veteran Anthony Maschek was subjected to on February 15th at a Columbia University ROTC hearing, one would hope that the University would be more sensitive to its treatment of disabled veterans.

When veterans are effectively treated as lab rats without their consent, when academics make their careers off the backs of military rape survivors and combat veterans, we must speak out and hold our institutions accountable, particularly one as highly respected as Columbia University.

I look forward to hearing from you, and would welcome the opportunity to meet with you in person.