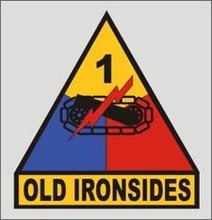 When I first had to prove my combat experience and therefore my stressors, to finally receive my benefits, I had to research what the hell my unit did so I could piece my memory together with the After Action Reports. Upon my research I came across a website run by a Desert Storm Vet and found this account of my unit's three campaigns, of the 1st Armored Division, Delta Company, 6th Battalion, 6th Infantry, I was on point for the 3rd Brigade and we took the brunt of combat.

It was not a Desert Storm, it was a storm in Hell.

...The Tawakalna Mechanized Division of the RGFC was positioned about 25 miles west of the Kuwait border, located exactly in the center of the US 7th Corps' sector; The Tawakalna was probably the best division in the Iraqi Army. It had fought with distinction during the war with Iran and was one of the lead divisions in Saddam Hussein's invasion of Kuwait in August 1990 (4). Its two mechanized brigades and one armored brigade were equipped with the most advanced equipment available in the Iraqi Army, including 220 T-72 tanks and 278 infantry fighting vehicles. On 25 February it had moved into a blocking position west of the Iraq Petroleum Saudi Arabia (IPSA) pipeline about 80 miles from Kuwait city. In spite of the air campaign, most of this division was in position and ready to fight when the US 7th Corps arrived on 26 February 1991 (5).

...With the destruction of the Tawakalna Division, Franks was able to focus the combat power of the 7th Corps towards the other heavy divisions of the Republican Guard Forces Command. Although part of the Medina Division would stand and fight against the 1st US Armored Division, the Iraqi high command ordered the Hammurabi Division to start moving north, across the Euphrates River and away from the American attack in the west. The Tawakalna Division's defense gave the remainder of the Iraqi Army in Kuwait the time it needed to evacuate most of its mechanized forces to Basra.

...When the confusing mêlée was over, the 1st Division tanks discovered that they had destroyed five of their own M1 tanks and four Bradleys. Six brigade soldiers perished in these attacks and thirty others were wounded.


Colonel Zanini synchronized the fight to maximize his fire power and minimize battlefield confusion. Artillery, Apache attack helicopters and mechanized infantry fired their weapons at the Iraqi defenders in order to prevent them from returning accurate fire as one of his tank battalions (Task Force 1-37 Armor) began moving in the dark towards the Iraqi defenses. This battalion's forty-five M1A1 tanks moved abreast towards the Iraqis at less than ten kilometers per hour. About 1,000 meters behind the tanks moved the battalion's infantry company mounted on its Bradleys, to help destroy any threat to their rear. As the tanks moved forward, the over watching infantry battalion began firing illumination rounds from its mortar platoon. The brigade commander then turned the fight over to the battalion commander, Lieutenant Colonel Ed Dyer (57).

As was the case with the entire Tawakalna division, the Iraqi soldiers fought hard. Many Iraqi tanks kept their engines off in order to defeat the American thermal sights. Those vehicles were often located because of the strange white spots, the tank commander's head, seemingly suspended in thin air.58 The Iraqi tanks that were not hit were able to turn their turrets and attack the M1s in their flanks and rear. Iraqi infantry moved in three to five second rushes in order to get close to attacking vehicles. Burning vehicles and explosions "washed out" the thermal sights and made it difficult for US forces to locate Iraqi tanks. In that confusion, the 29th Iraqi Armored Brigade knocked out four M1 tanks, wounding six US soldiers (59).

The Iraqi brigade, however, never had a chance. It was attacked by Task Force 1/37 Armor, the tank battalion with the best gunnery skills in the entire US Army (60). When TF 1/37 had completed its assault, the Iraqi unit was in shambles. Because of luck, training, and the effectiveness of the Abrams' enhanced armor, there were no American fatalities. In the sector swept by the 1st Brigade, two Iraqi tank companies and one mechanized infantry company (approximately 24 T-72 tanks and 14 BMP infantry fighting vehicles) had become burning hulks (61).

At the same time the American ground forces were demolishing the front line of the Tawakalna, US attack helicopters, jet aircraft, and artillery were simultaneously attacking the Iraqi division throughout the depth of its defensive zone. The primary targets included artillery batteries, command posts and supply depots.

As soon as the 2nd Armored Cavalry Regiment made contact with the Tawakalna Division around 4:30 pm, 26 February, the battle began. Artillery from the Regiment's field artillery batteries and the 210 Field Artillery Brigade pounded the second line of Iraqi troops. Those missions destroyed troops and supply installations and interfered with the Tawakalna's command and control (63). The 2/1 Attack Helicopter Battalion, working for the 2nd Armored Cavalry Regiment, struck at artillery and support areas to the rear of the Iraqi lines. It destroyed at least two artillery batteries and dozens of vehicles and support installations along the IPSA Pipeline road (64).

This assault continued until the 1st US Infantry Division passed through the 2nd Armored Cavalry Regiment. The 1/1 Attack Helicopter Battalion then attacked the 18th Iraqi Mechanized and 9th Iraqi Armored Brigade's second line of troops at 9:00 pm, on 26 February.65 The attack prevented the Iraqi artillery from interfering with the 1st Infantry's passage of lines. From the time the 2nd Armored Cavalry Regiment made contact, on the night of 26 February, until the following morning when the 1st Infantry Division cleared Objective Norfolk, the Iraqi soldiers of the 18th and 37th Brigades received no respite from constant ground, artillery, and air attack.

The situation was the same in the US 3rd Armored Division zone of operations. Its constant pounding of Iraqi combat and combat service support units made Iraqi counterattacks, resupply or reinforcement almost impossible. Those incessant attacks destroyed Iraqi artillery, broke up units assembling for counter-attacks, and thoroughly disrupted Iraqi command and control. When the 3rd Brigade passed through at dawn on 27 February, there were no more Iraqi strong points to slow the attack. The Iraqi commander had no way of countering the effects of these deep attacks. He had no choice but to stand and fight or surrender. Most of the soldiers in this proud division, like its commander, fought and died (66).

Soon after the 1st Armored Division's attack started at 8 PM on 26 February, the 3rd Armored Division launched an attack just to the south of the 1st Division. One hour later, the 1st Infantry Division passed through the 2nd Armored Cavalry Regiment and captured all of Objective Norfolk. Franks had wanted to slam into the Republican Guards with a "three division fist."67 That is exactly what he did. Franks defeated the Tawakalna Division by massing six brigades and an armored cavalry regiment against it, and flanking it to the north and south with two more brigades. Attack helicopters and long range artillery systems had bombed the Tawakalna beforehand.

The Tawakalna division commander, who probably perished in the battle, never had an opportunity to maneuver, use reserves, or even use his artillery with any effect. His spirited defense, however, confirmed Frank's concern that the Republican Guard did not enter the battle already defeated. They did not run away, and fought with extreme bravery. American battle reports cite the bravery of the determined Tawakalna defenders. This division had good equipment.
Unfortunately, they did not know how to use it fully. For example, they did not know how to employ their equipment to ensure that they had local security, allowing the 2nd Armored Cavalry Regiment to gain contact with them without discovery. The Tawakalna division was unable, regularly, to hit the targets at which they aimed with their tanks and anti-tank guided missiles. Seldom did the Tawakalna division effectively use their artillery or air defense artiller(68).

More important than problems in using equipment, The Tawakalna division was simply, overwhelmed. It was the application of the US Army's Air-land Battle doctrine,69 executed by well-trained, equipped and motivated soldiers, that defeated the Iraqi forces. By dawn on 27 February 1991, the Tawakalna Mechanized Infantry Division had ceased to exist.

With the destruction of the Tawakalna Division, Franks was able to focus the combat power of the 7th Corps towards the other heavy divisions of the Republican Guard Forces Command. Although part of the Medina Division would stand and fight against the 1st US Armored Division, the Iraqi high command ordered the Hammurabi Division to start moving north, across the Euphrates River and away from the American attack in the west. The Tawakalna Division's defense gave the remainder of the Iraqi Army in Kuwait the time it needed to evacuate most of its mechanized forces to Basra.