How do I explain PTSD to an elementary school age kid who is clearly frustrated by the dramatic change of pace from his home life to that of weekends with his father?

You were too young to remember when your dad went to Iraq to fight in the war. While he was overseas he saw many bad things and needed to protect himself and others from danger. He couldn't just run away and hide, he had to be very brave and not show any sign of fear even if at times he was scared inside. Now he is back home, having to cope with danger all the time has made him quiet and not very playful, but he had to learn to be strong and silent. He's like that all the time not just when you're around so don't think it's your fault.

You know how your dad "jumps" when you drop a toy on the floor or fire your cap gun? That's because there were many explosions and gun shots in Iraq which made deafening noises and meant he could be seriously hurt or even killed. When your dad hears loud noises now it still makes him jump because he is reminded how deadly bombs and bullets are. Just for a second it makes him think he is back in Iraq until he remembers he is home with us.

When he was on duty he sometimes had to patrol in a vehicle or on foot and when there were lots of people around it threatened his safety, that is why he does not like to be around crowds. He still thinks he has to watch all the faces and their movements in case they are getting ready to hurt him. Pax helps your dad feel safe when he goes out in public, he can help him watch all the people when there are too many for your dad to keep track of. 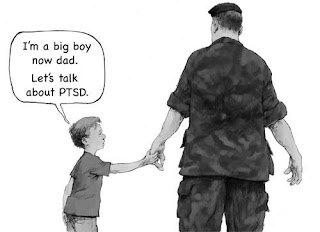 Sometimes when you ask your dad a question and he tells you he has to think about it, it's because his head was injured by bomb blasts. You know when you watch a movie and there is an explosion and people are thrown through the air? That's what happened to your dad and now he sometimes has trouble remembering things or answering your questions right away. That is called TBI (Traumatic Brain Injury), his brain was injured when it got banged around inside his head.

Do you remember the other day when you asked your dad if he would play hockey and he said "we'll see, maybe later"? Remember how I made him go outside and play with you? Your dad did not like playing out in the driveway because cars drive past the house. During the war he had to stop cars at roadside checkpoints and search them for bombs and guns so he and his fellow soldiers would be safe and come home to their family. He also had to concentrate and watch traffic very carefully from high up in a tower, so he doesn't like being distracted when there are cars around, even if it is to play a game.

Sometimes people can be hurt deep down on the inside where you can't see it but it is there. Your dad has PTSD (Post Traumatic Stress Disorder). Post means after the war, Traumatic means bad things happened during the war and his life was in danger, Stress means his body is reacting to the bad things... kinda like how you get hives, and Disorder means he will never be the same man he was before he went into combat.

Anyone else had to try and explain PTSD and/or TBI to their kids?
By PTSD, A Caregiver's Perspective