Stabbed in the Face

To the Man Who Stabbed me in the Face,

I never realized until later how I had offended you the many times that I did, I honestly was ignorant of my causing you to lose face in front of people you had grown up with. I see now the symbolism lost to both of us in the moment, by your attacking me when you perceived an honorable way to recover your lost esteem. I was flippant, arrogant and unable to quantify your sarcastic attempts to inform me of your slighted facade. Facades do clash. 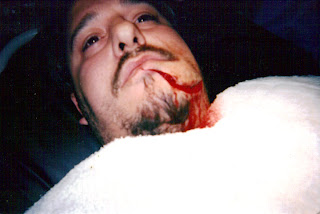 Today I see how you interpreted my willingness to jest with you as a sign of disrespect, for I have been educated in the ways of jousting by seeming immortals of the sport. My pretense in the way that I carried myself during this time was in the order of a knight ready for battle.

I was thinking of how at one time that I felt it unjust for the punishment that you received for nearly taking my life, these thoughts led to me writing these words. I was thinking how you had to use your house for a property bond and the fear you must have felt to possibly loose your new home you labored mightily for. I likened this intense apprehension to the immense anxiety I felt after having been triggered into another compartmentalized Post Traumatic psychosis. Although one more weighty than the other we both received our consequences from the ordeal.

I realized today that I had confused my pride for integrity which lead to infamous righteousness indignation. I have told many people how our actions combined to provoke a change in my life and credit you for bringing about my willingness to transmute everything about me that I found lacking.
By Scott Lee