A thundering explosion rocks downtown Baghdad, your body recoils at the deafening sound, adrenaline courses through your veins driven by a heart suddenly hammering within your chest. No time to react; the air expands with punishing force as the concussion of a devastating shock wave races through the afternoon air. It roars in your ears, slams you to the ground, snatches the breath from your lungs shaking every structure, and blowing out every window in its unstoppable path.

As you struggle to your feet a searing rush of heat sends you back to your knees scalding your skin with its suffocating cloak. No time to think; shrapnel flies through the air like a million angry bullets simultaneously fired in every direction. Twisted chunks of white hot metal violently crash to the ground like meteors hurled toward the earth by angry gods punishing all in their path. Your ears are screaming, a ringing so loud you cry out but are unable to hear your own voice.

Now on your feet, all around is burning; acrid smoke chokes the air and burns the soft membranes in your nose and throat. In a surreal moment, a gentle Baghdad breeze momentarily clears the scene… are those charred and grizzled shapes within the mangled wreckage human beings? Before you comprehend the horror of what you're seeing, another gust sends a curtain of black smoke across the morbid sight as though to shield the burning corpses from your gaze. 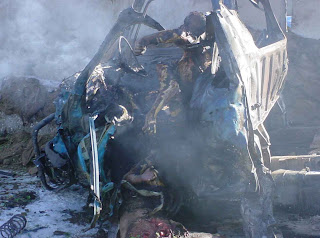 Your hearing slowly returns to the sound of frantic Arabic voices, police and locals swarm onto the street to load the dead and dying into the back of ramshackle pickup trucks. Just how many misguided Iraqis offered up their lives in Allah's name that afternoon? You count the legs, the arms... but the bodies have melded, intermingling in the inferno of the blast. Who knows how many deadly human weapons conspired to sacrifice themselves in that monumental act designed to kill you and as many of your fellow soldiers as possible.

You may not have lost your life that day, but back at home in the US these horrific recurring events have caused you to sacrifice your way of living.

I wrote this based on an account of just one of the suicide bombing missions my husband was caught up in. He says it's an accurate description but rightly pointed out unless you have been through something as horrific as this you cannot possibly convey to others the true force of the impact, explain the indescribable carnage, and the accompanying sounds and sickening smells.
By PTSD, A Caregiver's Perspective